As his eyelids slowly opened, an orange ball of fire descended from the sky. He heard an explosion, followed repeatedly by others. Screams and angry yells echoed through the air. Tires screeched, and cars crashed on contact. Footsteps pounded the pavement like thunder. Frantic faces filled with fear cried with apprehension.

Inside his jacket, he felt the heavy weight of steel. He braced the gun with both hands and pointed it in front of him. Quivering with excitement, he fired six consecutive shots, the bullets leaving trails of smoke.

“Jesse! Get in your room and pick up your toys.”

Hearing his mother’s voice, Jesse got up slowly, standing above his toy soldier. He bent over and picked it up. The small plastic green figure stood about two inches high, with immovable parts: his warrior and hero.

Longing to continue his adventure, he stared at the other soldiers from a distance. His childlike mind fought the transition back into reality, the soldiers’ words still on his lips.

Escaping back into his imaginary world, he bent over to place his green playmate among the others.

“You’d better be picking up those toys and cleaning your room,” came his mother’s voice again.

Jesse looked around in a daze, slowly coming back to the present. Annoyed with the interruptions, he frowned. At five years old, he stood just a little over three feet tall, with a frail body and the somber look of someone older. His skin was cocoa-colored taffy, his hair short and dark as coal. He wore a short-sleeved red-print shirt, blue jeans, and white canvas sneakers. His clothes were meticulously neat.

He stood up slowly, resenting having to give up his adventure. He knew that his mother meant business, so he headed toward that dreaded place. Emerging from behind the living room sofa, he walked in the direction of his room, passing the empty kitchen. Then he stopped, took four steps backward, and slowly crept across the kitchen floor. Approaching the gigantic refrigerator, he struggled with the handle but managed to open the door. He peered inside.

Something was terribly wrong.  His senses were screaming as he felt an intense, haunting stare. There was an eerie presence in the room.

A trembling, nervous feeling came over him,sending a chill through his body.

He hurriedly gathered his things and dashed to the door,locking it behind him.

While looking down the corridor,he noticed the hallway had become darker. The fluorescent lights hanging from the ceiling flickered dimly onto the speckled,pale green linoleum floor. The walls seemed to take on an eerie shade of gray. Now,an even greater sense of fear overcame him. As he continued looking down the corridor, he noticed a dark image approaching him in the distance,gliding along the ceiling. He continued staring until the oncoming mysterious shadow came into focus. 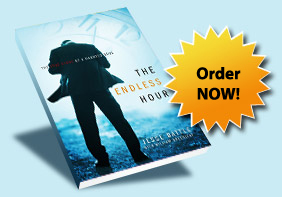